Hypoplastic left heart syndrome (HLHS) describes a spectrum of cardiac abnormalities characterized by marked hypoplasia of the left ventricle and ascending aorta. This is the same disorder sometimes characterized as hypoplasia of the aortic tract complex. The aortic and mitral valves are atretic, hypoplastic, or stenotic. A patent foramen ovale or an atrial septal defect is usually present. The ventricular septum is usually intact. A large patent ductus arteriosus supplies blood to the systemic circulation. Systemic arterial desaturation may be present because of complete mixing of pulmonary and systemic venous blood in the right atrium. Coarctation of the aorta is also commonly present. 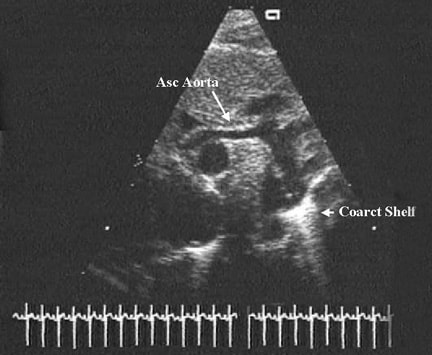 This echocardiographic still frame shows a long-axis view of the aortic arch in a patient with hypoplastic left heart syndrome (HLHS). The ascending aorta is markedly hypoplastic, serving only to deliver blood in a retrograde fashion to the coronary arteries. An echo-bright coarctation shelf is seen at the insertion of the ductus arteriosus. 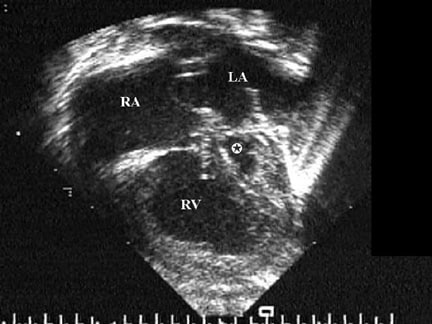 Hypoplastic left heart syndrome is a uniformly lethal cardiac abnormality if not surgically addressed. Since the description of surgical palliation by Norwood in the early 1980s and the description of allograft cardiac transplantation by Bailey in the mid 1980s, the interest in this lesion has remarkably increased. Currently, the Norwood surgical approach consists of a series of 3 operations: the Norwood procedure (stage I), the hemi-Fontan or bidirectional Glenn procedure (stage II), and the Fontan procedure (stage III). Orthotopic heart transplantation provides an alternative therapy, with results similar to those of the staged surgical palliation. Currently, the survival rate of infants treated with these surgical approaches is similar to that of infants with other complex forms of congenital heart disease in which a 2-ventricle repair is not possible.

Hypoplasia of the left heart structures is noted, with enlargement and hypertrophy of the right heart. Similar to other congenital heart defects, hypoplastic left heart syndrome also has a spectrum of severity. In the most severe form, aortic and mitral valve are atretic, with a diminutive ascending aorta and markedly hypoplastic left ventricle. The left atrium is usually smaller than normal, although it may be normal in size or enlarged. It receives all pulmonary veins. Pulmonary vein stenosis is a rare but important abnormality.

The mitral valve may be atretic, hypoplastic or severely stenotic. The atretic mitral valve consists of fibromuscular tissue instead of a membrane. When the valve is stenotic, the entire mitral valve apparatus, including the valve annulus, valve leaflets, papillary muscles, and chordae tendineae, is small and hypoplastic.

The left ventricle is usually a thick-walled, slitlike cavity, especially when mitral atresia is present. When the mitral valve is perforate, the left ventricular cavity is small. Endocardial fibroelastosis is usually present. The aortic valve is either severely stenotic or atretic. The ascending aorta is often severely hypoplastic, measuring 2-3 mm in diameter, serving as a conduit to supply blood to both coronary arteries in a retrograde fashion. However, it may approach normal dimensions.

Coarctation of the aorta may be present in a significant number of patients with hypoplastic left heart syndrome, but interrupted aortic arch is rare. The right heart (ie, right atrium, right ventricle, pulmonary arteries) is markedly enlarged.

A patent foramen ovale is common; herniation of the valve of the septum into the right atrium may be noted. Rarely, the patent foramen ovale is completely closed. A true atrial septal defect is rarely present. Ventricular septal defect is not considered to be an integral part of hypoplastic left heart syndrome, although it may be present in the syndrome of mitral atresia with normal aortic root.

The most common presentation is visceroatrial situs solitus with D-ventricular loop and atrioventricular and ventriculoarterial concordance, as well as levocardia. Rarely, dextrocardia and heterotaxy may be present.

Because of widely patent ductus arteriosus and high pulmonary vascular resistance in the fetus, a small portion of the blood from the right heart enters the lungs. Most of the blood is directed into the aorta via the ductus. Once in the aorta, the blood gets distributed into the brachiocephalic vessels, ascending aorta, and descending aorta. The quantitative distribution into these different vascular beds depends on their relative vascular resistances. The ascending aortic blood flows in a reverse direction and supplies the coronary arteries.

The fetal hypoplastic left heart syndrome circulation differs from the normal fetus in the following manner:

The newborn infant with hypoplastic left heart syndrome has a complex cardiovascular physiology. Fully saturated pulmonary venous blood returning to the left atrium cannot flow into the left ventricle because of atresia, hypoplasia, or stenosis of the mitral valve. Therefore, pulmonary venous blood must cross the atrial septum. In most babies, a patent foramen ovale is present and is small and partially obstructive. This blood mixes with desaturated systemic venous blood in the right atrium. The right ventricle then must pump this mixed blood to both the pulmonary and the systemic circulations that are connected in parallel, rather than in series, by the ductus arteriosus. Blood exiting the right ventricle may flow (1) to the lungs via the branch pulmonary arteries or (2) to the body via the ductus arteriosus. The amount of blood that flows into each circulation is based on the resistance in each circuit.

Blood flow is inversely proportional to resistance (Ohm law); that is, when resistance in blood vessels decreases, blood flow through these vessels increases. Following birth, pulmonary vascular resistance decreases, which allows a higher percentage of the fixed right ventricular output to go to the lungs instead of the body. Although increased pulmonary blood flow results in higher oxygen saturation, systemic blood flow is decreased. Perfusion becomes poor, and metabolic acidosis and oliguria may develop. Coronary artery and cerebral perfusion also depend on blood flow through the ductus arteriosus and then retrograde flow via the aortic arch and ascending aorta. Therefore, increased pulmonary blood flow results in decreased flow to the coronary arteries and brain, with a risk of myocardial or cerebral ischemia.

Most patients with hypoplastic left heart syndrome also have coarctation of the aorta. This can be significant enough to interfere with retrograde flow to the proximal aorta.

Frequency is similar to that in the United States.

Without surgery, hypoplastic left heart syndrome is uniformly fatal usually within the first 2 weeks of life. Survival for a longer period occurs rarely and only with persistence of the ductus arteriosus and balanced systemic and pulmonary circulations.

Following the Norwood procedure (stage I), overall success (survival to hospital discharge) is approximately 75%. Success rates are higher (85%) in patients with low preoperative risk and lower (45%) in patients with important risk factors. The risk factors for poor result are multiple and vary from study to study and include prematurity and major noncardiac malformations. Other identified risk factors include surgery in older infants (>1 mo), significant tricuspid regurgitation, and pulmonary venous hypertension. High Aristotle scores are also associated with poor prognosis.

Some centers have reported stage I survival rates in excess of 90%. This appears to be related, in part, to institutional surgical volume. The overall success following the bidirectional Glenn or hemi-Fontan procedure (stage II) approaches 95%. Success after completing the Fontan procedure (stage III) approaches 90%. Orthotopic heart transplantation results in early and long-term success similar to that of staged reconstruction. Among low-risk patients who undergo staged reconstruction or transplantation, actuarial survival at 5 years is approximately 70%.

Substantial morbidity is associated with multiple cardiac catheterizations, cardiac interventions, and cardiac surgery in patients undergoing Norwood palliation. Similarly the need for multiple cardiac biopsies and hospitalizations related to immunologic management and infections exist in patients who had cardiac transplantation.

Most studies report neurodevelopmental disabilities in a significant number of patients who survive either staged surgical reconstruction or cardiac transplantation.

Hypoplastic left heart syndrome is more common in males than in females, with a 55-70% male predominance.

The clinical features of hypoplastic left heart syndrome (HLHS) largely depend on the patency of the ductus arteriosus, the level of pulmonary vascular resistance, and the size of the interatrial communication.

No consensus has been reached in the approach to the treatment of neonates with hypoplastic left heart syndrome (HLHS). Supportive care, multistage surgical intervention (ie, Norwood, Glenn, and Fontan procedures) and cardiac transplantation are available options. A thorough explanation of each of these options, including their advantages and disadvantages, should be provided to the parents.Occasionally, some anatomic features favor one choice over the others. In the presence of severe tricuspid or pulmonary valve anomalies, the multistage surgical approach is not likely to be beneficial; cardiac transplantation is the only surgical choice. In most cases, the choice of treatment is based on the parents’ preference. While such a decision is being made, the infant should be stabilized.If supportive care is chosen by the parents, they need strong emotional support because the condition is fatal without active treatment.

Sano’s modification of the Norwood procedure:

These agents are used in the treatment or prevention of thrombo-occlusive disease mediated by the action of platelets. They inhibit platelet function by blocking cyclooxygenase and subsequent aggregation.

Speak to an SSRI Lawyer about an SSRI Birth Defect Lawsuit

If you took Zoloft (sertraline), Prozac (fluoxetine), Celexa (citalopram), Paxil (paroxetine) or another SSRI antidepressant drug during pregnancy and your child was born with hypoplastic left heart syndrome (HLHS) or any other serious congenital heart, lung or other birth defect, we encourage you to contact an SSRI Litigation Attorney at our law firm immediately. It may be too late to recover from the devastating effects of Zoloft (sertraline), Prozac (fluoxetine), Celexa (citalopram) and Paxil (paroxetine), but an experienced products liability lawyer at the Willis Law Firm can assist you in a legal action against the makers of these drugs. You are not alone. Join other birth defect victims and their families in speaking up and fighting for your legal rights.

Please fill out our free online legal evaluation form and we will contact you within 24 hours. Please keep in mind that certain states have statutes of limitation that limit the amount of time you have to file a lawsuit or seek legal action. Contact our law firm immediately so that we may explain the rights and options available to you and your family.