What is Patent Ductus Arteriosis? 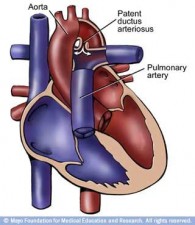 Causes of Patent Ductus Arteriosis – Use During Pregnancy

If your child was born with patent ductus arteriosis (PDA) or other congenital heart defects and an antidepressant such as Zoloft, Prozac, Lexapro, Paxil or Celexa was taken during all or part of the pregnancy, then call now for a free consultation with an SSRI Antidepressant Lawyer. You and your child may have a legal right to monetary compensation for damages and injuries. Call 1-800-883-9858 or fill out the form on the right for your free legal consultation.