What is Pulmonary Atresia? 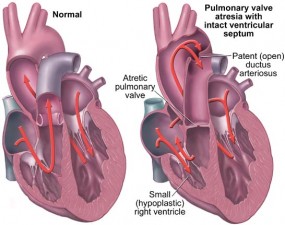 Pulmonary atresia (PA) is a defect in which the valve that lets blood flow from the lower right chamber (right ventricle) of the heart to the lungs (pulmonary valve) has not formed correctly or is closed (atresia). Pulmonary atresia is a rare congenital heart defect, meaning that it is a defect that develops during prenatal growth.

While still in the womb, the baby receives oxygen from the placenta before the lungs begin to function. Normally, blood from the right side of the infant’s heart passes through a hole that allows oxygen-rich blood to flow to the left portion of the heart and throughout the infant’s body. After birth, the hole closes as blood instead flows through the newborn’s lungs to provide it with oxygen. In infants with pulmonary atresia (PA), the closed valve does not allow the infant’s heart to pump blood to the lungs to gain oxygen. The blood must get to the lungs via an alternate route to provide oxygen to the child.

Causes of PA – Antidepressant Use During Pregnancy

Pulmonary atresia (PA)  tends to occur during fetal growth when the infant’s heart is still developing. The use of SSRI antidepressants such as Zoloft, Paxil, Prozac, Celexa, or Lexapro during all or part of the pregnancy may significantly increase the risk of a congenital heart defect such as pulmonary atresia (PA).

If your child was born with pulmonary atresia(PA) or other congenital heart defects and an antidepressant such as Zoloft, Prozac, Lexapro, Paxil or Celexa was taken during all or part of the pregnancy, then call now for a free consultation with an SSRI Antidepressant Lawyer. You and your child may have a legal right to monetary compensation for damages and injuries. Call 1-800-883-9858 or fill out the form on the right for your free legal consultation.