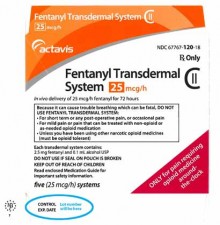 What is an Actavis Fentanyl Pain Patch?

According to Actavis, the possible “fold over defect” in some lots of the Actavis Pain Patch which could lead to the potential for too much fentanyl to be released into the bloodstream via the skin. The illness that patients experienced was an overdose of fentanyl. Too much of this powerful pain medication is not only dangerous, but also could prove to be fatal.

A fentanyl overdose can lead to respiratory depression, which in turn slows breathing and the heart rate. Over long periods of time, risks including heart attacks and other negative cardiovascular events can occur, many of them fatal if not addressed and treated promptly.

In addition to the Actavis Fentanyl Pain Patch Recall, other fentanyl pain patch recalls have warned that “exposure to fentanyl hydrogel could result in an increased absorption of the opioid component, fentanyl, into the skin and bloodstream, leading to an increased drug effect, including nausea, sedation, drowsiness, and potentially life threatening complications.”

There is evidence to suggest that all Actavis fentanyl pain patches on the market at the time of the recall, even those outside the 14 lots involved in the initial Actavis fentanyl patch recall, could have all had the very same defect, and risk of fentanyl overdose with potentially life threatening results.

Fentanyl is a potent Schedule II opioid medication. Fentanyl pain patches that are cut or damaged in any way should not be used. Anyone who comes in contact with fentanyl gel in pain patches should thoroughly rinse exposed skin with large amounts of water only; do not use soap. Immediately safe-guard affected pain patches with damaged edges by storing them in a plastic container in a safe location, using caution not to handle the fentanyl in the fentanyl pain patches directly.

Please fill out the Free Case Evaluation to the right or call us toll-free at 1-800-883-9858 for immediate help. Please keep in mind that certain states have a statute of limitations that limits the amount of time you have to file an Actavis Fentanyl Pain Patch lawsuit or to seek legal action. Contact our law firm immediately so we may explain the rights and options available to you and your family.