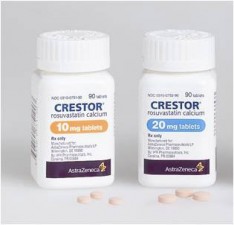 A recent Crestor study was published in The New England Journal of Medicine that involved more than 17,000 subjects and examined the Crestor’s effectiveness in reducing elevated blood levels of C-reactive protein (CRP), a suspected marker for cardiovascular disease. It is generally accepted at the present time that an increased level of inflammation is associated with a higher incidence of heart attacks and strokes.

In the Crestor-CRP study, the authors reported that over an almost two year study, there was a 44% reduction in cardiac events (defined by the study as heart attack, stroke, severe angina, or cardiac death) among the subjects in the Crestor group versus those in the placebo group.  A 44% reduction sounds impressive, but in this case, it is very misleading.

In fact, the difference was so tiny that it would require 120 individuals with elevated CRP taking Crestor every day for two years in order for just one person to possibly obtain that benefit.Meanwhile, the other 119 individuals taking and paying for Crestor for the same two years would obtain no protection from any of the listed cardiovascular events, and would be exposing themselves to a host of other known potential Crestor and statin side effects, as well as other potentially serious complications.

Why push the Crestor-CRP study results so loudly inspite of them being so tiny?

The truth of the matter is that the Crestor-CRP study was underwritten by AstraZeneca, the manufacturer of Crestor. It has been seen over and over that the marketing divisions of large pharmaceutical companies are true experts at generating the maximum amount coverage by the commercial media for their studies, even if any actual results are minimal or unimpressive, as is clearly the case in the Crestor-CRP study. As is true in most advertising campaigns of this type, vast exposure means greater sales and huge profits.

In only one case did a major news media outlet offer a dissenting opinion. In “Doctor Urges Caution in Interpreting New Findings on Cholesterol Drug,” Dr. Nortin Hadler of ABCNEWS.com wrote, “The benefit shown in this study is tiny, and if [the Crestor-CRP study] were repeated, there might be no benefit at all. I never leap to act on the basis of such small effects.”

A far more serious adverse effect occurred with Crestor: 270 cases of newly diagnosed diabetes were reported among Crestor users, and 216 cases were reported among placebo users. The 54 additional cases of diabetes in the Crestor group was a significant and worrisome finding. Diabetes is one of the most destructive, life-shortening disorders of our time. It also is a leading cause of heart attacks and strokes.