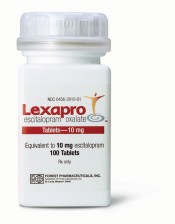 The link between SSRI antidepressants like Lexapro (escitalopram) and congenital heart defects has many professionals concerned about pregnant women being prescribed the antidepressant medication Lexapro. SSRIs like Lexapro, Celexa, Prozac, Zoloft and Paxil have also been linked to increased risk of Persistent Pulmonary Hypertension of the Newborn (PPHN).

Lexapro (Generic: escitalopram) is grouped with other antidepressants as a Selective Serotonin Re-uptake Inhibitor (SSRI) which works by raising serotonin levels in the brain, which in turn regulates mood, sleep and appetite. Lexapro (escitalopram) affects chemical levels in the brain that may become unbalanced and create symptoms. Lexapro is used to treat depression and generalized anxiety disorder (GAD; excessive worry and tension that disrupts daily life and lasts for 6 months or longer). It works by increasing the amount of serotonin, a natural substance in the brain that helps maintain mental balance.

Researchers from the University of Pittsburgh estimated in May 2005 in the Journal of the American Medical Association, that in any given year at over 80,000 pregnant women in the U.S. are prescribed SSRIs.

Lexapro and other SSRIs have been linked to serious birth effects, including increased risk of congenital heart defects, Persistent Pulmonary Hypertension of the Newborn (PPHN) and documented serious withdrawal symptoms.

Health Canada advised of potential adverse effects of SSRIs and other antidepressant drugs including escitalopram (Brand name: Lexapro) on newborns in 2004. This report was intended to increase awareness among mothers and physicians of possible symptoms and side effects occurring in newborns, so that symptoms could be recognized and addressed quickly.

When the Food and Drug Administration (FDA) approved Lexapro (escitalopram) in 2002, it became one of the most widely prescribed drugs for depression on the market.  A 1996 study published in the New England Journal of Medicine revealed that women taking SSRIs like Lexapro during pregnancy were two times as likely to deliver a baby with three or more abnormalities and poorer than average neonatal adaptation.

SSRI antidepressants like Lexapro, Celexa, Prozac, Zoloft and Paxil have been linked to cases of serious congenital heart defects, which may include atrial septal defects (ASD – Hole in the Heart), ventricular septal defects (VSD – Hole in the Heart), tetrology of fallot (ToF),  hypoplastic left heart syndrome (HLHS), transposition of the great arteries (TGA or TOGA), patent ductus arteriosus (PDA), total anomalous pulmonary venous return (TAPVR), double outlet right ventricle (DORV), and coarctation of the aorta (CoA).   In many cases, surgery is required when a child is an infant or toddler and then again, potentially multiple times, as the child grows to maturity. Many congenital heart defects are treatable when they are diagnosed and addressed early.  Children may be able to lead mostly normal and productive lives following medical attention.  However, in some cases the only viable option to  preserve the child’s life and correct these severe heart defects involves a heart transplant.

There is also a strong link between SSRI antidepressants and other congenital birth defects and malformations, including lung, cranio-facial, limb (arm, hand, leg, foot) and abdominal wall defects. A study conducted at Aarhus University Hospital, Denmark, revealed that the risk of pregnant women giving birth to babies with congenital defects, including heart and other defects, was higher among women who had been prescribed and taken SSRIs such as Prozac in the month prior to conception through the end of their first trimester when compared with those who had no SSRI prescriptions filled during the same period.

Women who are taking SSRI antidepressants, including Lexapro, who are pregnant or thinking about becoming pregnant should speak with their doctor about the risks associated with taking Lexapro or any other SSRI antidepressant while pregnant. There are risks associated with taking Lexapro while pregnant.  There may also be concerns about discontinuing this medication. All Birth defect risks should be discussed with a physician and balanced against any possible benefits of taking this medication.

In Lexapro lawsuits involving catastrophic injury or death, an individual lawsuit, in most cases, is more appropriate and in the plaintiff’s best interest. SSRI antidepressants like Lexapro, Celexa, Paxil, Prozac and Zoloft have been linked to severe congenital heart defects, including: atrial septal defects (ASD – hole in the heart), ventricular septal defects (VSD – hole in the heart), tetrology of fallot (ToF), hypoplastic left heart syndrome (HLHS), transposition of the great arteries (TGA or TOGA), patent ductus arteriosus (PDA), total anomalous pulmonary venous return (TAPVR), double outlet right ventricle (DORV), and coarctation of the aorta (CoA). Lexapro cases such as these are better suited to an individual Lexapro lawsuit because of the severity and degree of injury to the plaintiff. In an individual Lexapro Lawsuit, each plaintiff’s case is filed, presented and considered individually, based on its own strength and degree of injury.

In many cases involving SSRI antidepressants like Lexapro, Celexa, Paxil, Prozac and Zoloft and the serious congenital heart defects related to these SSRI antidepressants, surgery is required. Heart surgery will typically be required when a child is an infant or toddler and then again, potentially multiple times, as the child grows to maturity. In many cases, with surgery and medical care, children may be able to lead mostly normal and productive lives. An individual Lexapro lawsuit allows each Lexapro victim, their injuries and their future needs to be considered on an individual basis when determining damages, awards and settlement amounts, and not as part of a class action lawsuit.

Please fill out our free online legal evaluation form and we will contact you within 24 hours. Please keep in mind that certain states have statutes of limitation that limit the amount of time you have to file a Lexapro lawsuit or seek legal action. Contact our law firm immediately so that we may explain the rights and options available to you and your family.