Pradaxa is a prescription blood thinner manufactured by German pharmaceutical giant Boehringer Ingelheim. Prescription blood thinners or anticoagulants like Pradaxa are meant to prevent stroke and other problems arising from blockage. Pradaxa is a relatively new drug on the market, and in its first year of operation it has reportedly led to more than 260 Pradaxa deaths.

Recent reports suggest that the number of Pradaxa deaths from internal bleeding may actually be much higher than previously believed. The product liability lawyers at The Willis Law firm are currently reviewing potential Pradaxa Lawsuits for individuals who have suffered from severe internal bleeding caused by Pradaxa. 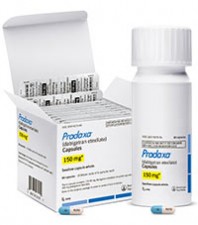 After reviewing the cases of the more than 260 Pradaxa patients who died from internal bleeding in Pradaxa’s first year, experts have suggested that the makers of Pradaxa, Boehringer Ingelheim, failed to adequately warn patients about the Pradaxa’s internal bleeding risk.

According to another report filed by the Institute for Safe Medication Practices (ISMP), Pradaxa had more problems reported about it than 98.7% of other drugs that the ISMP was monitoring. A majority of these negative reports about Pradaxa related to internal bleeding among Pradaxa patients. Internal bleeding can be mild such as in cases of mild bruising, but it can also be very serious and potentially lead to death.

It is expected that some internal bleeding might occur from a blood thinner like Pradaxa because that is part of the functionality of the drug, but not to the extent that it has from Pradaxa. Pradaxa has led to hundreds of internal bleeding deaths that were not adequately warned about by the pharmaceutical company. It is for that reason that there are currently Pradaxa lawsuits being filed for patients who have suffered or died from Pradaxa related internal bleeding.

This is one major reason why Pradaxa may be much more dangerous than previously thought, and why there have been so many cases of internal bleeding among Pradaxa patients, even many leading to Pradaxa deaths.