What is Ebstein’s Anomaly? 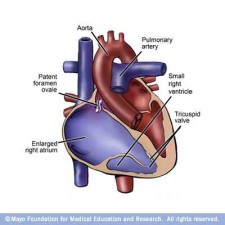 through the valve, making the heart work less efficiently. Ebstein’s anomaly can also lead the heart becoming enlarged or even heart failure. As with many conditions, the severity of Ebstein’s anomaly may range from minimal side effects to very severe. Ebstein’s anomaly is commonly seen along with an atrial septal defect (hole in the wall dividing the two upper chambers of the heart).

Ebstein anomaly is typically characterized by a severely deformed and displaced tricuspid valve. As a result, blood regurgitates or leaks backwards from the right ventricle into the right atrium. This syndrome also characterizes an opening in the septum between the atria (ASD). The ASD allows oxygen-poor blood to flow from the right atrium into oxygen-rich blood of the left atrium causing cyanosis (blueness of the skin).

Some more mild forms of Ebstein’s anomaly might not show symptoms until adulthood. Some of the symptoms may include:

Causes of Ebstein’s Anomaly – Antidepressant Use During Pregnancy

Ebstein’s anomaly typically occurs because of improper development of the heart during pregnancy. Other heart abnormalities are sometimes present at birth (congenital) in infants who have Epstein’s anomaly. The use of SSRI antidepressants such as Zoloft, Paxil, Prozac, Celexa, or Lexapro during all or part of the pregnancy may significantly increase the risk of congenital heart defects such as Epstein’s anomaly.

If your child was born with Ebstein’s anomaly or other congenital heart defects and an SSRI such as Zoloft, Prozac, Lexapro, Paxil or Celexa was taken during all or part of the pregnancy, then call now for a free SSRI Antidepressant Lawsuit Consultation. You and your child may have a legal right to monetary compensation for damages and injuries. Call 1-800-883-9858 or fill out the form on the right for your free legal consultation.